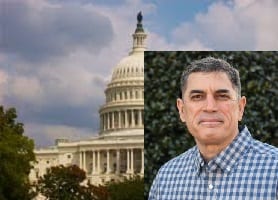 H.R. 127 focuses on gun control legislation and Clyde urged every American to call their Representatives concerning all the firearm bills. Universal background checks are a part of H.R. 8 and H.R. 1446 closes the Charleston loophole.

“There was no Charleston loophole,” Clyde asserted. “That bill simply extends the amount of time that the government has to respond to a background check.

The Representative, and gun store owner, plans to introduce another bill to change background check responses from three business days to three calendar days. He cited an issue that arose during the pandemic where some people had to wait weeks or months to pass background checks because the government was shutdown.

The Senate filibuster might prevent H.R. 8 or 1446 from moving forward. The bills would need 60 Senators agreeing to bring it to the floor for a vote.

Clyde also focused on the Restore America Act and the provision for farmers and ranchers facing discrimination. 120 percent of a farmers’ USDA loan would be paid off under the bill, H.R. 1319. The 20 percent takes care of the taxes on the loans.

Ninth District Representative called out Senator Raphael Warnock (D – Ga) and Coca-Cola for supporting the bill. He added, “how can that not bill a criminal violation of the Civil Rights Act of 1964?” He wants the Department of Justice to investigate the provision based on the Civil Rights Act.

Later, Clyde commented that the bill is “biased toward blue states” because it’s based on unemployment numbers. Several Democrat-run states continue to experience higher unemployment than Republican states. According to the U.S. Bureau of Labor Statistics, in December 2020, California had an unemployment rate of 9.1 while Georgia’s unemployment rate was 5.3 percent.

As for H.R. 1, the bill regulating elections on the federal level, Clyde believes it will die in the Senate.